Tales from the UNCG University Archives

Tales from the UNCG University Archives 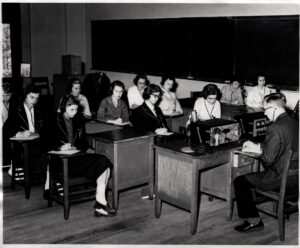 Foreign language instruction has been an integral part of UNC Greensboro throughout its history, drawing nationally and internationally recognized scholars, authors, and poets to the school.

While the school was initially created as State Normal and Industrial School, designed to instruct students on becoming teachers (normal school) or another trade or vocation (industrial school), school founder Charles D. McIver felt strongly that several liberal arts courses should be offered. During the first school year, 1892-1893, three foreign languages were taught in the Department of Ancient and Modern Languages – German, Latin, and French.

The Department of Romance Languages first appeared in the university’s catalog during the 1915-1916 school year until the name was changed to the Department of Languages, Literatures, and Cultures. Currently, the department offers courses in nine languages: American Sign Languages, Arabic, Chinese, French, German, Japanese, Korean, Russian, and Spanish.

Special Collections has a number of collections from faculty members in the department, including Dr. Ramiro Lagos, Dr. Roch C. Smith, and Dr. Mark Smith-Soto.

Dr. Ramiro Lagos, who identified his scholarly focus as “Hispanoamerican literature, culture, novels, poetry” and contemporary Spanish writers, is an internationally and nationally recognized poet. Writing primarily in Spanish, Dr. Lagos published 27 books of his poetry and essays and four anthologies of poetry from Latin America and Spain. Dr. Lagos served as a faculty member at UNCG from 1966 until his retirement in 1966, although he continued to be involved in taking students to Colombia and other Spanish-speaking countries for instructional trips. To learn more about the Ramiro Lagos Papers in Special Collections, please visit this link: https://uncg.as.atlas-sys.com/repositories/2/accessions/3076

Dr. Roch C. Smith, whose scholarly focus was on 20th century French literature and criticism, was appointed to head of the Department of Romance Languages in September 1983, after serving as acting head since 1981 and as a faculty member at UNC Greensboro since 1970. Dr. Smith was integral in directing two graduate language institutes at the university, funded by an $87,137 ($252,932.64 in 2022 money) grant from the National Endowment for the Humanities. The first institute was focused on Spanish language, while the second was focused on French. Dr. Smith was eventually appointed to serve as associate dean of the College of Arts and Sciences. To learn more about the Roch C. Smith Papers in Special Collections, please visit this link: https://uncg.as.atlas-sys.com/repositories/2/resources/196

Dr. Mark Smith-Soto, whose scholarly focus was Spanish and comparative literature, was appointed to department head in August 1986 after serving as a faculty member since 1975. Dr. Smith-Soto is also a nationally and internationally recognized poet. His awards include a fellowship in creative writing from the National Endowment for the Arts; he won North Carolina Writers’ Network’s Persephone Competition for his chapbook Green Mango Collage (2000), as well as their Randall Jarrell-Harper Prints Poetry Competition for the chapbook Shafts (2001). Dr. Smith-Soto was also the founding director of the Center for Creative Writing in the Arts at UNC Greensboro. Smith-Soto also served as editor of the flagship publication, International Poetry Review. To learn more about the Mark Smith-Soto Papers in Special Collections, please visit this link: https://uncg.as.atlas-sys.com/repositories/2/resources/752

Through its different incarnations, foreign language instruction has been tremendously impactful on UNC Greensboro. The different departments on campus have been well-known for spring festivals, travels to other countries for immersive instruction in languages and cultures, language institutes, and its publication International Poetry Review.